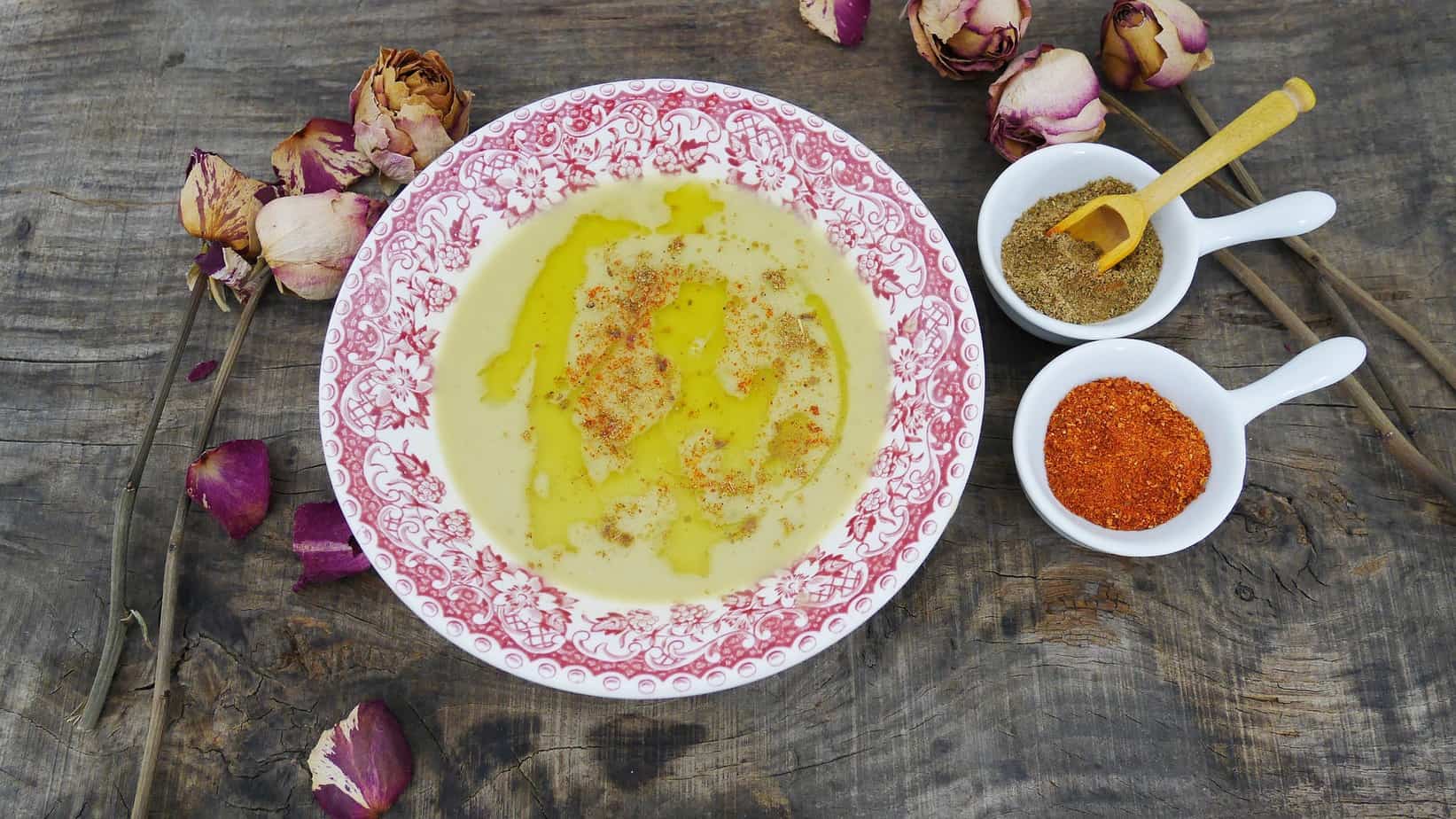 Bissara is a traditional Moroccan split pea soup that can be also used as a dip. We previously mentioned this delicious dish in our list of the best Moroccan dishes and in this post, we’ll share our own bissara recipe, show you how to prepare this dish, and teach you everything about its origin, history, serving tips, and other trivia. Let’s start from the beginning…

The word “bissara” derives from “bees-oro” that translates to “cooked beans”. The dish originates from the North African region and today is officially a part of Egyptian and Moroccan cuisine but there are many different varieties of bissara and it’s very popular in other North African and Middle Eastern countries too. Our bissara recipe focuses on the Moroccan version but we’ll also cover…

The Moroccan version of bissara comes in two varieties; the split pea soup which is perfect for Morocco’s chilly winters and the dried fava bean dip which uses more or less the same ingredients but has a different texture. The dip is especially popular in the northern part of Morocco and is usually accompanied by fish dishes, taktouka, and Moroccan bread (usually khobz).

In Egypt, bissara is exclusively served as a dip prepared with herbs or leafy greens (spinach, mint, or parsley), lemon juice, and onions. It’s usually consumed as a meze (snack) and is served with bread and rarely, as a main course dish. In Egypt, bissara is relatively cheap and has a reputation of a poor man’s dish.

Are you a fan of Maghreb cuisine? Make sure to check out our zaalouk recipe.

According to several historical sources, the first bissara recipe dates back to ancient times. Fava beans have been originated in North Africa since 18,000 years ago and the first variation of bissara appeared in North Africa from where it spread in the Middle East and Europe. As we mentioned, the dish was considered a poor man’s dish in Egypt and most of North Africa but that changed recently.

Today, bissara is one of the most beloved dishes in Egypt, Morocco, and Palestine, and even though it isn’t popular in Europe anymore, many European travelers that visit Morocco or Egypt fall in love with this dish.

The main ingredient for this bissara recipe are green peas which are very nutritious and contain a significant amount of antioxidants and fiber that can protect against chronic illnesses. Additionally, this dish is vegetarian (and can even be vegan if you use vegetable oil) and is one of those dishes that are living proof that vegetarian/vegan can be tasty!

Traditionally, bissara is served warm in a heated communal dish. If you ask me, this adds a special flavor to the dish but there’s also nothing wrong in serving it in individual bowls or deep plates. As for garnishing, the most common add-ons are cumin, harissa, cilantro, parsley, and paprika but you can also serve some or all of these condiments on the side.

Finally, if you’re planning to make bissara, keep in mind that you need to soak the dried fava beans overnight or at least for a few hours but since bissara is usually eaten for breakfast (or as meze before lunch) most people soak the beans overnight.

Alternatively, if you don’t want to wait for the beans to soak and are in a rush, you can always replace the beans with some chickpeas and jump straight to the recipe.

1. Chop the onions and garlic.

2. Add some olive oil in a large pot and cook the onions and garlic until fragrant.

3. After 5-6 minutes, add the remaining ingredient (including water), and boil the broth over high heat in the next 7-10 minutes.

4. Reduce the heat and boil the broth for 45-50 minutes over low fire until the peas are tender. Stir occasionally.

5. Use a blender or food processor to puree the soup. Use a towel or kitchen gloves to hold the lid firmly; the pressure from the steam can cause the broth to splash.

6. If necessary, thin the puree with some more water and aim for soup-like consistency.

A Few More Things You Might Need For This Bissara Recipe

How did you like our bissara recipe? Did you ever try this popular Moroccan dish? Feel free to share your thoughts in the comments and if our recipe was useful for you, don’t forget to leave us a rating!